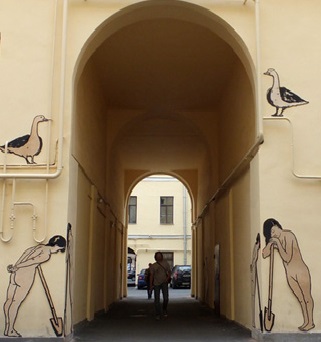 Lives and works in St. Petersburg. Graduated from Leningrad state Institute of theatre, music and cinematography (1995).

He works as a production designer in the theater, as well as painting, installation and performance in the field of contemporary art under the pseudonym Hokusai.Member of the Union of artists of Russia since 1998.

Since 2010 member of the Association “art. gallery Parasite.” In 2011 his project “Juices! Light!”he was nominated for the Kandinsky prize — “Project of the year”.Permanent co-author of Directors Andrey Moguchy and Yuri Butusov. He worked at the Alexandrinsky theatre (St. Petersburg), BDT them. G. A. Tovstonogova (St. Petersburg), Bolshoi Theatre (Moscow), Theatre. Lensoveta (St. Petersburg), the Moscow art theatre. Ah. Chekhov (Moscow), Ramtha (Moscow), “Satyricon” (Moscow) and others.For the design of theatrical performances Alexander Shishkin received numerous theater awards: Golden Mask (2008, 2011, 2012), Stanislavsky Prize (2009), crystal Turandot (2004), “Golden spotlight” (2010) and others.In 2010, he joined the independent art Association “Parasites” and from that moment begins his work as a contemporary artist.In 2015, he created a large-scale installation “growing up Practices” in the street art Museum. It consisted of more than 200 figures, the largest of which reached a height of 12 meters.Member of the first Triennale of Russian contemporary art, organized by The garage Museum of contemporary art, in the section “Morphology of streets”, which brought together artists for whom “street art is the most important creative practice»